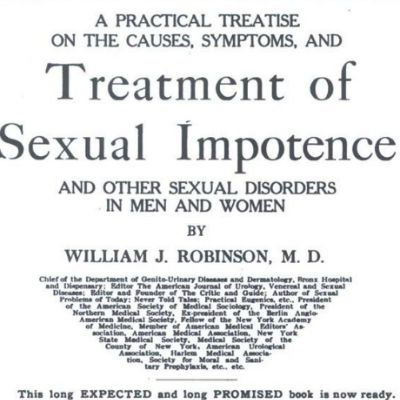 Dr William J. Robinson was the editor of the MEDICAL REVIEW OF REVIEWS, which was a very prominent medical magazine founded in 1895. Charles Barnes Towns was hired in early 1916 to write a “Drug Addictions and Alcoholism” column even though Towns had but an eighth-grade education. The reputation of Towns Hospital and the Towns Treatment had gained Charles Towns access to the top of the medical community in the country.

Dr. Robinson was an accomplished author in his own right. The image associated with this article comes from the title page of his book Treatment of Sexual Impotence. Robinson listed his medical credentials beneath his name for which he was apparently very proud.

The purpose of including this information on Dr. Robinson is to provide additional background to the colleagues that Charles Barnes Towns had earned by his reputation of knowing more about successful alcoholism and addiction treatment than virtually anyone. While doctors claimed a variety of sophisticated expertise, the vast majority had no clue of what to do with addicts or alcoholics. Many extremely prominent doctors of the time turned to Towns and believe that he had the best solution in the world.